History of golf in Scotland

A way back in 1457, “Gowf” as it was called by the Scots was banned by parliament under King James II as it was considered a distraction to military training. This ended in 1502 when the “Treaty of Glasgow” was signed.

The oldest existing golf course today, is Musselburgh Old Links, established circa 1672. It is claimed that Mary Queen of Scots played there in 1567. Today, the course can still be played and is now surrounded by a race course (horse). At the far end of the nine hole track is Mrs Foreman’s, a pub, when back in the day, drinks (ginger beer) were served through a “hole in the wa’” (hole in the wall).

St. Andrews has a 600 year history with golf. Some say the game started when the sea merchant traders came in to the town via the Eden Estuary to sell their goods and on their return to their ships, they invented the game by hitting stones with sticks, as they had nothing else to do. 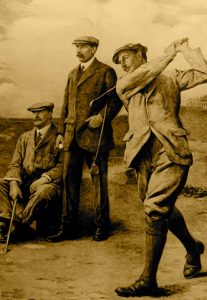 Whatever the reason, we’re glad it happened. A simple path through gorse, heather and bushes laid out the basis for the courses, which is known to us today as St. Andrews Links.

In the 1800’s, the game really exploded on to the world stage and is known as the game we play today. Along the way there were significant stops which helped mold the game, the first being the “gutta percha” ball and the development of clubs with metal heads.

Another development was the introduction of a railway system, allowing people to travel to St. Andrews from afar.

Another was Old Tom Morris himself. Apart from all his playing accomplishments, to which there are many, (he holds the record for being the oldest Open champion, which was nearly taken from him this past Open Championship by Tom Watson at Turnberry). Just like a putt though, nearly’s don’t count.

Old Tom’s son, Young Tom was no slouch at the game either, winning the Champion’s Belt (before the introduction of the Claret Jug) no less then 4 times. Sadly, Young Tom died at an early age.

James Braid was the next big name to arrive on the scene. Born in 1870 in Fife, he became a professional at the grand age of 26. Braid was a pioneer in the development of “aluminium” (aluminum to most nowadays), giving more feel to stroking the ball.

Later, he became one of the great “Triumvirate” of golfers, along with Harry Vardon and J.H. Taylor. Between them they would dominate golf in the early 20th century. Braid followed in the steps of Old Tom and is responsible for designing more than 250 courses, the most famous being the King’s and Queens Courses at Gleneagles, which opened in 1924.

The Honourable Company of Edinburgh Golfers was formed in 1744, originally playing on Leith Links, where there were 5 holes. They moved to Musselburgh’s 9 holes in 1836. In 1891, they moved again to their current home in Gullane, at Muirfield.

In 1860, Prestwick held the first Open Championship with only 8 players entering the competition. 2010 is the 150th anniversary of the Open Championship and it’s being was held in it’s rightful location, The Old Course, St. Andrews. 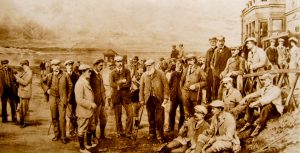